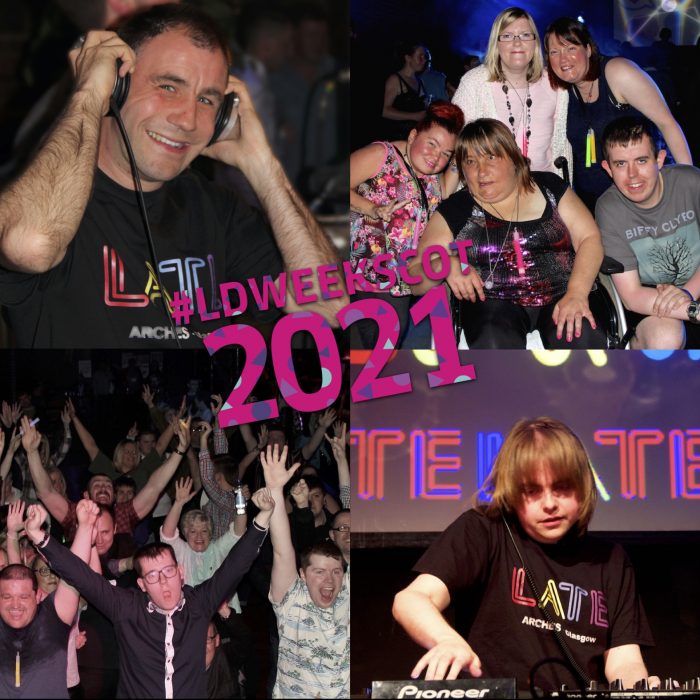 LATE – Scotland’s first fully inclusive club night, launched on Tuesday 10th of April 2012 at the Arches in Glasgow. With over 200 people attending the launch night, it was clear that there was a demand for inclusive clubbing (#InclusiveClubbing).

LATE was launched by the dating and friendship agency, dates-n-mates, a project of C-Change Scotland. The idea of LATE was to hold a genuinely inclusive club night actively promoted to people with learning disabilities though open to all.

For four hours on the 10th of April 2012 people with and without disabilities danced, drank and simply enjoyed themselves and the company of each other. The only difference from a regular club night was the presence of colleagues and volunteers ensuring everyone was safe and felt included (connecting people on their own to others). Disabled and non disabled DJ’s played.

Just a decade ago (from launch night) in large institutions such as Lennox Castle Hospital, males and females had been purposely segregated. Intimacy was ‘breaking the rules’ and relationships discouraged. A ‘night out’ for people with a learning disability often meant a soft drink and a few hours in a brightly lit hall with an outdated CD compilation on repeat. Draconian rules such as bedtime curfews and strict adherence to ‘risk assessment’ policies meant access to a ‘normal life’ was almost impossible.

Since the launch night, dates-n-mates has gone on to hold many Club LATE nights (at times with up to 300 people in attendance) in a variety of accessible venues.

In 2018 dates-n-mates went into partnership with Include Me 2 Club and in April 2018, launched a monthly club LATE, almost 6 years on from the initial launch night. The launch of the first monthly night at G2 (Part of The Garage) in Glasgow was a huge success, the energy was great – it just felt right. The increased frequency opened Club Late up to more people who wanted to have a great night out.

Unfortunately, these events have been paused during the pandemic however we cannot wait until they can start again.

Through Club LATE, many new relationships have been formed and existing relationships strengthened. People have told us they now have more confidence to try other nighttime activities on offer.

Clyde 1, DJ Garry Spence helped us launch the night over 9 years ago and continued to support Club LATE with a regular slot. Garry told us:

A regular attender of LATE and dates-n-mates member Malcolm told us:

Keep up to date with all things LATE by following the Club LATE facebook page: facebook.com/clublateglasgow

Click play in audio option below to listen to this blog.